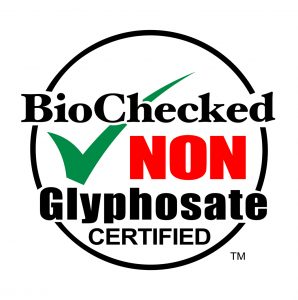 Nokomis, FL ///  Oct. 5, 2015 – BioChecked™ launches Glyphosate Free Certified™ certification for food and produce products.  BioChecked™ a leading independent 3rd party certification company is offering packaged food producers and fresh produce producers a service where they can get their produce, ingredients and products tested and be reviewed and placed into their new Glyphosate Free Certified™ program.  This program consist of regular testing of a producers produce or products for a chemical that is used as a herbicide on plants that normally are genetically modified.  With the current industry hype for GMO labeling, one of the more critical issues that is not being talked about is the actual contamination of this herbicide into our food.

It’s quite crucial to understand that glyphosate contamination is systemic, meaning it is present in every cell of the plant, from root to tip. It’s not just an issue of topical contamination, as with many other agricultural chemicals sprayed on crops.  Normally, you need to thoroughly wash your produce to remove topical residues, but you simply cannot remove glyphosate from your produce. And neither can food and animal feed manufacturers who use GE ingredients in their products.

BioChecked™ has several independent third party certification programs for businesses, organizations, producers and individuals that have become or want to become leaders in environmental and health friendly actions.

Our brands have become the leading industry “Marks of Consumer Environmental and Health Awareness”.